Classification of cheeses according to the French. If we haven’t had much experience with cheese, we might think that the only thing that differentiates them is that some are more stinky than others. Or some are easier to melt than others. Don’t worry if you think so, even French people have difficulty identifying the different types of cheese and their respective families.

What is a cheese according to the French?

As I pointed out in the article “France is a cheese-producing country par excellence“, there are more than 1200 different varieties of cheeses, creams and butters in France. Incredible, isn’t it? But then, how do you classify these 1200 different varieties? First, let’s define what a cheese is: according to the decree of 12 November 2013 of the French government (décret no. 2013-1010):

“Cheese is a fermented or unfermented product, refined or not, obtained from the following materials of exclusively dairy origin: whole milk, partially or fully skimmed milk, cream, fat, whey, used alone or mixed and fully or partially coagulated, before draining or after partial elimination of the aqueous portion. In addition, the minimum dry matter content of the product as defined above must be 23 grams per 100 grams of cheese“.

So, as you can see, “fromage” is a product for all tastes! From the youngest to the oldest members of the family will be able to have their favorite choice.

How are French cheeses classified?

To make a long story short, cheeses in France are divided into three main families and these in turn have sub-families:

What is the difference between white and fresh cheeses?

The difference according to French regulations is that fresh cheeses are allowed to be sold as “fromages frais” only if they have a living flora of micro-organisms.

Therefore, both cheeses are unrefined white cheeses that have undergone a fermentation, usually lactic. What is lactic fermentation, you may ask? Without going into too much detail, cheesemakers have two main methods to start making cheese, the first is through lactic fermentation by adding cultures such as lactobacilli and streptococci which accelerate the agglomeration of the proteins present in the milk and therefore the formation of solids, and the second is by means of enzymes, commonly using rennet which is a product obtained from the stomach of small mammals, calves, goats, etc.

Among the white cheeses, we can find the famous petit-suisse and flavored cheeses. Whoever has not tasted a petit-suisse has missed the opportunity of a delicacy, you can eat it with a touch of sugar or jam, and it is so sweet and creamy that it is consumed by both young and old, not for nothing it is the most consumed cheese in France!

What is the difference between soft cheese with a bloomy and a washed rind?

At the ripening stage, it is at this stage that the cheeses with a bloomy rind are separated from those with a washed rind. As the name suggests, the former develop a white fungus which could be either penicilium candidum or camemberti and in the case of washed rind cheeses, their rind is washed, rubbed, and brushed.

Apart from the refining stage, the manufacturing process is basically the same, obviously with their respective differences such as temperature, geographical location, quantity of milk, etc. so that each cheese has its own personality.

There are more than 30 famous cheeses that fall into this category, abroad the most recognized are probably the Brie de Meaux PDO or the Brie de Melun PDO and Camembert de Normandie PDO, here I leave you the article “Everything you need to know about French Camembert Cheese“.

The particularity of this type of cheese is that the cheese mass is not pressed, and the rennet is cut into small pieces or “crumbs”, allowing the formation of holes throughout the mass. These holes allow the cheese to breathe and thus allow the Penicillium Roqueforti or Penicillium Glaucun fungus to develop. This fungus is added during the process to obtain the specific flavor of each cheese and is responsible for the marbled appearance with green or blue tones. Therefore, they are commonly called blue cheeses.

Within this category there are about fifteen blue cheeses, 7 of which have PDO certification, in this article you can learn all about what is a PDO certification “France is a cheese-producing country par excellence“. But undoubtedly the most famous both within France and abroad is the Roquefort PDO cheese, which curiously is made from 100% sheep’s milk from the laucane breed, anyway I leave you the link in case you are interested in knowing more about it, All you need to know about Roquefort cheese.

What is the difference between pressed cheeses?

As the name suggests, the manufacturing process between cooked and uncooked pressed cheese is the same, except that the former has an additional stage called cooking. This step is normally carried out before molding and is basically a heating at temperatures between 50 and 58 degrees centigrade (122 and 136,4 degrees Fahrenheit) depending on the recipe of each cheese.

In the rest of the stages, each recipe has its own variations so that each cheese can be obtained with its specific physical and flavor characteristics.

Of the family of cooked pressed cheeses, three recognized cheeses have a PDO label, Beaufort, Comté and L’abondance. All cheeses are made from cow’s milk. An interesting fact is that in the past the word “Gruyère” was popularly used for a long time to define all the cheeses of this subfamily, today the word is French-Swiss property and defines both the French Gruyère PGI cheese and the Swiss Gruyère AOP.

Regarding the subfamily of uncooked pressed cheeses, the most recognized cheese both nationally and internationally is undoubtedly the Raclette cheese, which like gruyère is French-Swiss property and the French version is the Raclette de Savoie PGI. This cheese became famous in the second half of the 20th century when the Alps became a favorite destination for tourists looking to ski during the winter, if you want to know more about the history of such an interesting cheese, in the following link we tell you ˝Everything you need to know about French Raclette cheese“.

What is the classification of melted cheeses?

Melted cheeses are classified among the cheese specialties and are so called because they undergo a cutting and melting process. Although there are cheeses that are sold and consumed melted, such as “La Cancoillotte”, this is not always the case, others, after the melting process, are moulded and sold in this way.

The interesting thing about melted cheeses, apart from being melted, is that they are made from other mature cheeses, i.e. the raw material is not milk, they are a mixture of cheeses that were matured for less than 2-3 months and then reprocessed and in some cases mixed with other dairy or non-dairy products to obtain the final product.

Now that you know all the families of French cheeses, all that remains is to try them! How do the French eat Camembert cheese ? 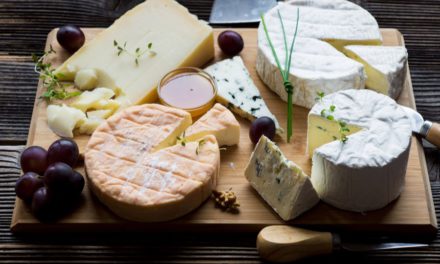